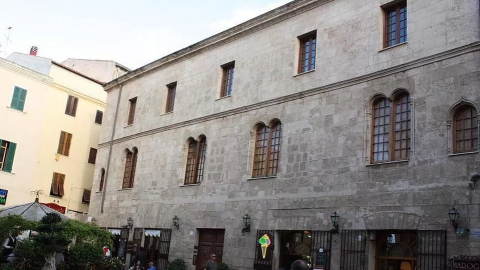 The Crown of Aragon awarded it the title 520 years ago, while in 1541 the Emperor Charles V landed there

520 years have passed since Alghero got the title of city and it was granted it by the Crown of Aragon. It was August 28, 1501 and Alghero had been conquered almost 150 before by the Catalan - Aragonese. This year, however, the 480th anniversary of Charles V's famous visit to the city is also celebrated. Both events will be celebrated and the municipal administration is working to prepare a series of events immediately after the summer.

So 1501 was the year that the Crown of Aragon defined the transition from "villa" to "city", with numerous and exclusive privileges that were accompanied by a form of self-government through locally elected representatives. The royal decree motivates as "convincing" the "consolidated economic and demographic increase" with which Alguer is elevated to a city. This, therefore, in consideration of the important role that Alghero was assuming and which convinced the Crown of Aragon to include Alghero in the ranks of the other Sardinian cities that had preceded it to the rank of Royal City. The Catalan-Aragonese had conquered Alghero in 1354, 148 years earlier, with the siege led by Peter IV the Ceremonious. The arrival of the King of Aragon was in fact a "reconquest" after the victorious assault of August 1353 when the fleet of Admiral Cabrera, set sail from Mahon, on the island of Menorca, with 46 galleys and 11 other ships, on which knights, archers and siege engines were embarked, he defeated the Genoese fleet in the battle of Porto Conte. A few months later, on October 15, Alghero was reconquered by a revolt by the Sardinian-Genoese. The occupation did not last long, until the arrival in November of the following year of King Peter IV himself. It was the beginning of the history of Catalan Alghero.

This year marks another anniversary: ​​that of the visit to the city of the Holy Roman Emperor Charles V, who, with his fleet headed for North Africa, made a stop in Alghero. In fact, between 7 and 8 October 480 years will have passed since 1541, a year which assumes considerable importance in local history, precisely because of this important visit and the various episodes, not all exciting, that would have characterized it. "The municipal administration - comments the councilor for Culture Marco Di Gangi - wants to celebrate these two anniversaries with a series of events in the planning stages, with the main objective of keeping alive and disseminating their history and those dates that more than others have had a profound significance and generated profound repercussions for Alghero and its citizens. Knowing one's past, one's roots, is an essential prerequisite for understanding the present ”. 2021 is a year full of historical celebrations for the city, centered on history and the significant cultural value it represents. Just as 2010 was an important year that celebrated the 50th anniversary of the "Retrobament".